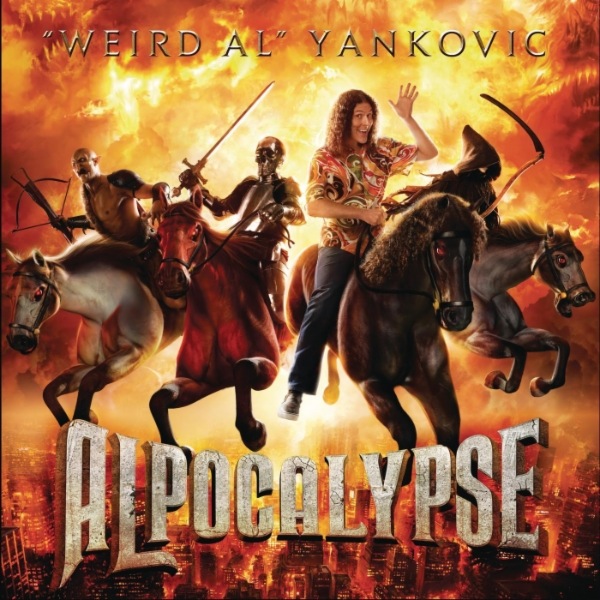 Weird Al’s latest album… Is it just as weird as his previous works? Is there enough accordion? Yes and Yes, my friend. Weird Al keeps doin’ what he’s always done with ‘Alpocalypse’.

Due to my Dad and Uncle’s influence, I’ve been a fan of “Weird Al” Yankovic since I can remember. I remember listening to ‘Jurassic Park’ and ‘Harvey The Wonder Hamster’ in the car when I was like six years old… and not understanding why the songs were funny, yet still was laughing. Jump fifteen years into the future and I’m still sort of doing the same thing. I know I like Weird Al… but, I can’t exactly put my finger on why. I think it may be due to my appreciation for talented musicians that don’t take themselves to seriously. Al is an extremely smart guy. He graduated Valedictorian from his High School and actually earned a degree in Architecture from California Polytechnic State University. Yet it seems like people don’t realize how much talent it takes to do what he does. Maintaining a career in music is difficult enough… but a career in parody? That ability to make someone laugh is incredible… and he’s been doing it for 30 years!

‘Alpocalypse’ is the Weird Al I’ve always known. Obviously a few tracks are better than others, but overall it’s a great effort on his part. There are a few stand outs: ‘Polka Face’, his classic polka collaboration of current hit music is terrific. I’ve always loved his choice of songs, and he doesn’t disappoint this time either. Somehow, he makes Katy Perry’s ‘I Kissed a Girl’ feel like it always should’ve been a polka standard. I also enjoyed ‘Ringtone’, an original track based around an annoying ringtone. It’s filled with great background harmonies throughout, as well as guitars that remind me of late 70’s Boston/Queen. My last stand out pick is ‘Stop Forwarding That Crap To Me’, an epic ballad about junk email. This track now makes me want to see Weird Al in concert just so I can watch how an amazing ballad (filled with driving guitars and a huge choir) is performed by the parody king himself. Overall, ‘Alpocalypse’ doesn’t disappoint. It’s weird, it has an overabundance of accordion, some yodeling is involved… all in all, it’s a classic Weird Al album. Below are videos and quick reviews of many of the songs on the album.

Perform This Way – A tribute to Lady Gaga’s ‘Born This Way’. It’s clever, but comes off more as mockery than parody.

TMZ – A parody of Taylor Swift’s ‘You Belong With Me’ based around TMZ’s celebrity obsessions. It’s also clever, but somehow already seems dated. More videos after the break.