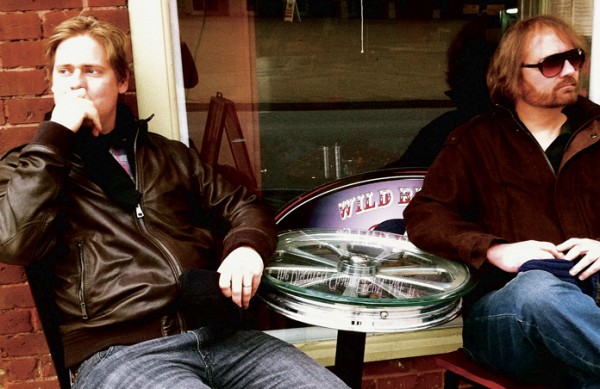 Tim and Eric Awesome Show, Great Job! may possibly be my favorite comedy TV show of all time. Absurdity at its finest is the only way I can sum it up. Tim Heidecker (one half of Tim and Eric) is actually quite an accomplished musician. Throughout the course of Tim and Eric, Tim has helped create some extremely bizarre songs to accompany their even more absurd sketches. Recently, Tim has teamed up with a Tim and Eric composer Davin Wood to create Heidecker and Wood, a musical side project that was born while messing around in his home studio. They’ve recently finished recording a full-length album of 70’s soft rock, Loggins and Messina/Steely Dan/Neil Young-esque originals, Starting From Nowhere. The entire idea for this duo was formed due to Davin’s ability to create such authentic sounding 70’s tracks combined with Tim’s ability to write absolutely puzzling (yet still somehow dry and entertaining) lyrics. I’ve listened to the entire album and I actually had to sit and collect my thoughts for a week before I could figure out what to write. (It took me a week to figure out what I thought of a glorified Tim and Eric album?!) I came up with this:

Tim and Davin have managed to create this odd area between absolutely bizarre humor and sincere musicianship. It’s such a fine line that literally forces the listener to draw their own conclusions as to whether or not the album was meant as comedy or was actually an honest attempt by musicians who just happen to also be comedians. Most comedians who infuse music into their acts tend to ultimately take the ‘funny way out’. By that I mean, audiences expect only a certain quality of music from comedians. For example, with Stephen Lynch, Jimmy Fallon, Bo Burnham, etc., it seems as if audiences are willing to let a musical comedian’s dialogue completely overshadow the music itself. This in itself has bred such an incredibly lazy disposition amongst stand-up comedians. Realistically, as long as you’re funny, then audiences don’t particularly care if you can actually play your instrument or not. Well, then why try? That attitude is the reason I like this record.

In twelve songs, Tim and Davin managed to prove that comedians are able to create music that isn’t just slapstick and parody. The reason for this? They’re real musicians! They understand how to craft a melody, plain and simple. Tim’s shaky vocals give each song this puzzling, yet somehow oddly enjoyable feeling. I’ll put it this way: It’s like Halls and Oates teamed up with the Doobie Brothers for a huge sold out concert. In the middle of the gig, they both start jamming together. Suddenly, Michael McDonald appears on stage and starts singing brand new lyrics over this sweet yacht rock jam. No one in the audience has ever heard this song before yet it somehow feels so comfortably familiar.

After a description like that, my real question is: why wouldn’t you listen to this record? Instead of spending so much time questioning the intent of the artists, just sit back and accept their sweet, sweet music.