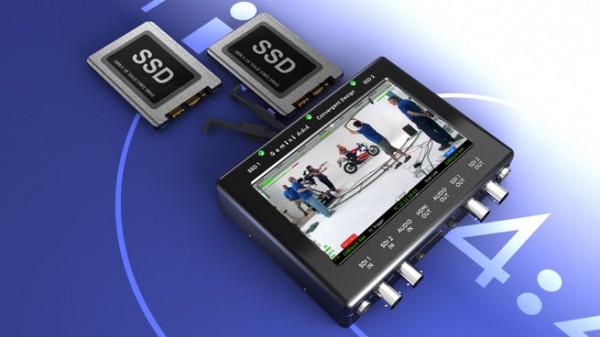 We’re living in some very exciting times when it comes to film technology as the “big boy toys” that are being created are finally in grasping distance of the independent filmmaker, something that was merely just a dream 5 years ago.  I recently had an email conversation with a good friend about the variety of portable digital recorders available for pro cameras and thought I’d share the info with you guys here on the blog.  These newer portable recorders allow you to take the output of certain cameras (i.e. Panasonic AF100, Sony F3, Arri Alexa) and record it to a portable hard/flash drive for instant playback and transcoding (since the transcoding is done on-the-fly with some recorders).  The time-saving aspect of transcoding on-the-fly alone is already being seen in many major productions since transcoding to an editable format is one of the most time-consuming parts of post-production.  My friend had just purchased an Arri Alexa with AJA’s Ki Pro Mini to extend recording times and was curious at what I thought of the set-up.  Here’s a brief synopsis of our conversation.

Basically, it really depends on how/what you are shooting.  For instance, there is only one recorder available under $10,000 that records at 2K, the Cinedeck Extreme Recorder but Convergent Design has the Gemini coming out this summer for about $6000.  These two are also the only ones that can record a RAW output, which will give you the best possible image file to work with as no compression is necessary but it will also take up the most hard drive space and be the most troublesome when editing as many NLEs don’t work well with RAW codecs yet.  Also, only the Cinedeck currently records at 1080p60 and (from my limited research) only the Ki Pro (not mini) records Variable Frame Rate (VFR) 720p so those features are out of the question on the others I’ll mention below.  In case you are wondering, the difference between the Ki Pro and Ki Pro Mini (besides size and storage) is that the Ki Pro can do Up/Down cross conversion and has analogue component inputs.

One of the best features of the Arri Alexa is that it has native ProRes support plus can record to ARRIRAW, though an external recorder for ARRIRAW is needed and extremely expensive.  Codex is coming out with one that should be less expensive but no one knows for sure when that will be.  More after the break.